Day One: July 3rd
Our family started this trip on July 3rd after camping at Split Rock with another family. We arrived in Ely and did some restocking before heading down to the ranger station, picking up the permit, having some lunch and heading down the Fernberg to the Lake One put-in. My wife met us at the EP30 put-in after finishing teaching down in the Twin Cities at about 2PM. It took us some time (about 2 hrs) to organize our gear after the camping and transition into the canoeing mode which in hindsight probably isn’t the best way to approach something like this — but then you work with the time you have off and this was the way it shook out.

We pushed off and floated away finally at about 4PM. Weather was good, still sunny, flies were manageable and water was calm. We found the first 19-rod portage to get into Lake One with little difficulty. However, the first portage into Confusion had some fairly vigorous rapids and strong current that you have to fight through. We were forewarned by another party of 3 canoeing families that the current “will push you right into the rocks/rock wall” and that you should “approach from the right bank (where the rock wall is). Good advice!

However, we approached that way and were pushed into the rock wall but then swamped a bit and backed off. Long story short, we paddled around the granite-faced corner of the ridge abutting the portage (opposite the 20r. portage into Kawishiwi) and dropped off my wife and two kids to bushwhack over to the portage trail while I attempted to get the canoe into the portage.
I approached the rapids this time from the left where there is ‘quiet water’ and turned quickly right to cross the rapids which are only about 10 feet or so wide, but strong — I was still pushed into the wall of rock but was light enough not to swamp and was then able to paddle myself into the portage trail.
My wife and kids made it through to the trail — a bit scratched up but happy! 🙂 After this portage trail, we pushed off and headed for the next portage which found quickly after winding our way through Confusion and finally arrived at Lake One. Loading up our gear, we recalculated our position with our maps and compass and shoved off.

I think Beymer describes Lake One as a confusion series of islands and channels that keep you referring back to your map and compass. We certainly had our challenges as we paddled out a bit too far south by southwest into the lake before heading east towards the next portage. Actually at this point we were tired, hungry and willing to settle for any open campsite. Landing the canoe on what we thought was the northern shoreline of Lake One and a promising campsite or two, turned out to be false alarms. Actually we were on the southern side of one of the two larger islands that block the view of the last three campsites on that shoreline on your way to the portage (first) into Lake Two. There was even a fire grate and ring (but no latrine) on one of the sites – must have been an old site. Turning the corner, we realized our error, shot a narrow channel between two islands and quickly found our cove campsite (#2).

Day Two: July 4th
Fourth of July: Our nation’s birthday. The day broke with plenty of early morning sun and calm winds. Enjoyed a leisurely breakfast of bacon, eggs and pancakes and plenty of coffee for the adults! Made plans to explore Lake Two while the weather held. 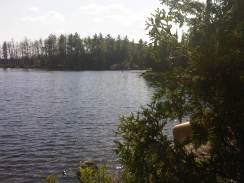 Around midday we made our way (it was truly a lazy day!) to the first and second portages into Lake Two. We decided to scout out a few recommended campsites for the next potential trip. Found a site about 2/3 of the way through Lake Two (inhabited) that was surrounded by the burn but had a wonderful stand of conifer and deciduous forest surrounding it. Swam and ate lunch at a little island just to the east of the campsite. Was able to do a bit of trolling with daredevil on the return journey just so I could claim it as a fishing excursion! No luck but then at about 3:30 or so in the mid-afternoon, my expectations were very low .

While we sorted out dinner, was able to start working the rocky structures in our cove with floating rap and then later with a jig, but still too early in the day. Dinner was great with a s’mores ending — always a great treat at the end of a day.

Day Three: July 5th
Got up early to give the fishing another try. Worked a ¼ oz jig again and landed a smallmouth which brought great excitement from our kids. Wind had been picking up and dropping down all night. Morning brought considerable breeziness, up to 10 with 15mph gusts. Oregon Scientific weather radio confirmed we were in for a bit of breezy day. Packed up the gear after a few excursions to fill the water gravity filter bags and get food set for the day’s excursion. We decided that it was a good day to stay on Lake One, find a place to swim and eat lunch close by to camp. So off we ventured, battling the wind and staying close to shorelines as we worked our way back to the portage out of Lake One. A little island haven with a wonderful campsite became our home for about two or three hours as jumped in to cool off, ate and joined the two families for another swim who were already camped on this deceptively, expansive little haven before heading back home to base camp. It was closer to 5PM when we made our back and the wind had died down considerably.

We decided on the return journey to go up Lake One arm all the way to the Kawishiwi Outfitters, do the “U-turn” down that pretty little narrow channel and cruise back into the Take out at EP31. A smarter choice for us! 🙂

There were some excellent camp sites on Lake One right next to the portage and also on a very small island directly in line of sight of portage off to the southeast — we stayed just a bit further on where there are the last three campsites on the north shore on the way to the portages for Lake Two (an excellent wooded, flat site with a rock wall at one end) by the way in a little protected cove and beautiful views out onto Lake One!